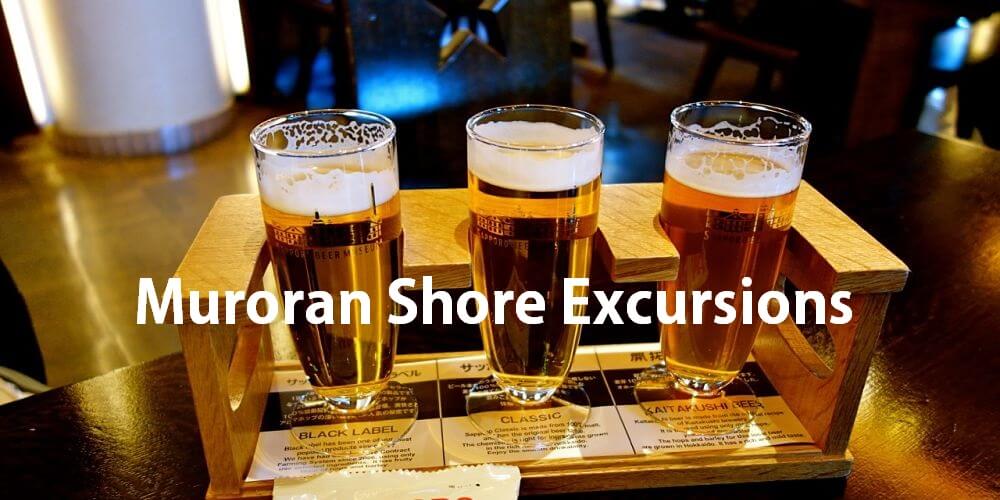 Despite not being the first destination when mentioning about visit Hokkaido, Muroran is still on the top of the must-visit place. Particularly, this town that time forgot used to be in a splendid setting with green-covered mountains and blue ocean far away. Although the active volcano brings grey smoke and ashes to the town, travelers consider it the highlight to visit Muroran. Moreover, the heat from the volcano creates many wonderful natural attractions such as Jigokudani Valley and Lake Shikotsu. From Muroran port, cruisers can also visit the city of Sapporo – the born land of the famous Sapporo beer. There are various highlights in Sapporo – Muroran shore excursions to explore.

Shore Excursions Japan introduces a wide range of choices for Sapporo – Muroran shore excursions for cruise passengers to choose. Freely wander for a while and pick up your favorite itinerary, or share your traveling plan with us. Then, our experts will discuss with you directly to design a new tour from Muroran port. 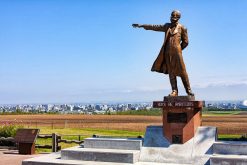 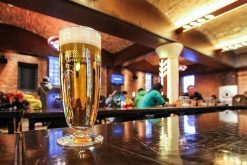 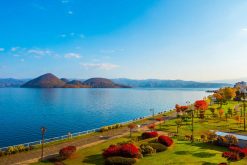 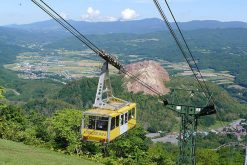 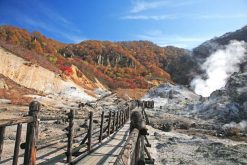 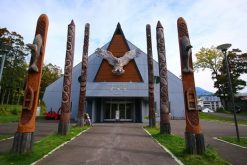 Best Things To See & Do in Muroran

Muroran is best known for shipbuilding, coal forwarding, and oil refining. Besides, this heavy industry city also has plenty to offer including a lot of spectacular lookouts, landscapes, and it is said to be a great place to go whale watching. Both natural landscapes and modern city’s features can be enjoyed in our Muroran Shore Excursions.

Located just above the town of Noboribetsu Onsen, Jigokudani is the place where visitors can have a closer look at the sulfurous streams, hot steam vents, and other volcanic activity. The attractive walking trails through the wooded hills above Noboribetsu will then take you to Oyunuma – a sulfurous pond with a 50-degree Celsius surface temperature. There is a river named Oyunumagawa that flows out of Oyunuma and flows through the forest. There is also a natural foot bath allowing visitors to enjoy along the way. In autumn, Noboribetsu is even more beautiful with adding colors creating spectacular scenery. 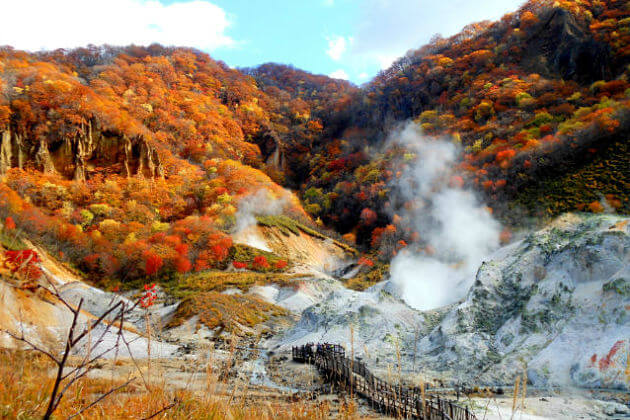 Located in the southern urban area of Muroran city, Cape Chikyu is regarded as one of the favorite tourist destinations in Muroran Shore Excursions. On a map, it resembles an apex of a triangle. Its name means "earth" in Japanese. It is included in the three main tourist spots that the globe looks round in Hokkaido along with Cape Soya and Kaiyoudai. There is a 13-kilometers-long coastline with a cliff over 100 meters high around the cape. Standing on the tip of the cape, there is a 147-meter observatory where visitors can soak in the panoramic view of the Pacific Ocean and a white lighthouse near it. Granted the first place in “100 Nature Selections in Hokkaido” and “You Chose Hokkaido Beauty Spots”, this scenic spot attracts more than 100,000 tourists until present and can be accessed easily via railroad, route bus and car. 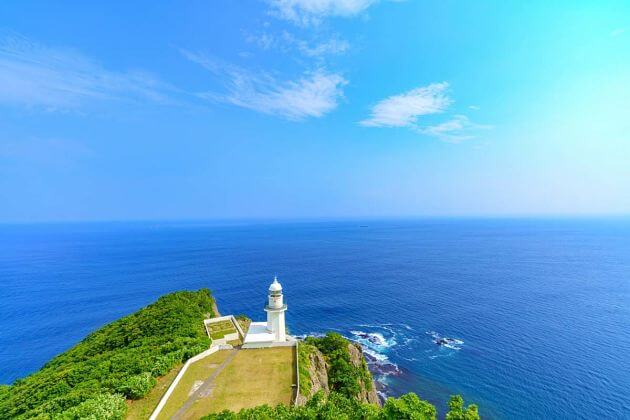 Situated at the tip of Lake Toya, Silo Observatory is granted the reputation as one of the leading photography spots in Hokkaido. It is also famous for offering a breath-taking view of Mt. Usu, Nakajima Island, and Mt. Showa Shinzan. Sky cruising is possible during certain seasons as there is a heliport located on-site. A Hokkaido souvenir shop can be found on the first floor. While on the second floor is a large restaurant offering 216 seats that are very suitable for group tours.

Known as one of the most outstanding features of the Shikotsu-Toya National Park, Lake Shikotsuko is a caldera lake resulted from collapses in the earth after volcanic activity. It is encircled by Mount Tarumae – one of the most active volcanoes in Japan. From late April to early November, visitors can join a sightseeing cruise of the lake in glass-bottomed boats or speed boats. 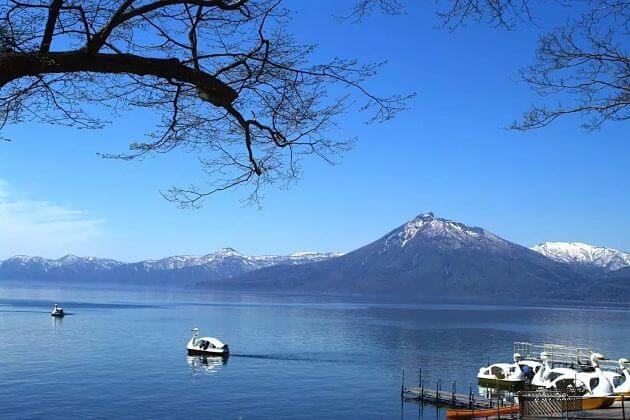 A must-visit destination included in every Muroran Shore Excursions is Sapporo Beer Museum which displays one of the oldest and most famous beer brands in the country that has been brewed in Sapporo since 1877. Opened in 1987, the Sapporo Beer Museum focused on introducing the history of beer in Japan as well as the process of beer making. Besides attractive exhibitions, beer tastings are also available for tourists at a very reasonable price. Next to the museum is the Sapporo Beer Garden that consists of a few restaurants. There are several beer halls among the restaurants and also a more sophisticated Garden Grill restaurant. Visitors can try on some popular dishes and drinks such as beer or mutton BBQ – a local dish named after the great Mongolian ruler Genghis Khan. 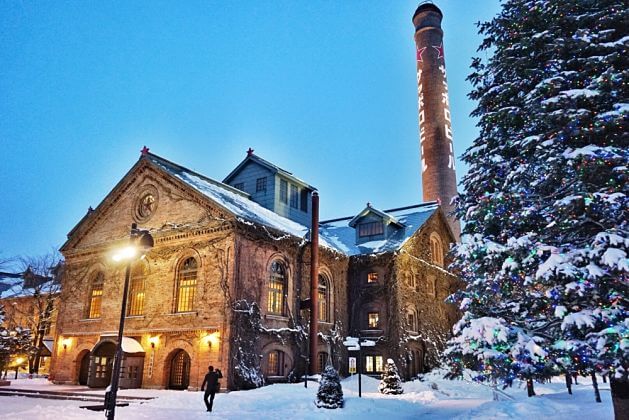 As “Hitsujigaoka” can be translated into “Hill of Sheep”, this is home to 2,000 sheep. This observation hill was first developed in 1906 as a cattle breeding station. Nowadays, the hill is also the home to the famous statue of Dr. William Clark and offers a panoramic view overlooking the Ishikari Plains, with Sapporo Dome in the foreground. There is also an “Austrian House” souvenir shop, a rest house & restaurant serving mutton, a wedding chapel, a lavender garden in summer and the Snow Festival Museum. The Austrian House includes a variety of souvenirs to choose from. At the back are a large field and a beautiful lavender garden that can be seen in full bloom in the summer. Visitors can visit the Rest House for lunch that involves a restaurant serving grilled mutton cooked on a hotplate. On the two floors of the restaurant, visitors can also enjoy venison and lamb chops. The wedding chapel is a pristine white building that holds many wedding ceremonies throughout the years. There is a charming white birch grove behind it. Together with the chapel is the Snow Museum containing information about all the Snow Festivals. It displays miniatures of the giant sculptures of the Snow Festival from decades past. The most famous feature of Hitsujigaoka Observation Hill is the statue of Dr. William Smith Clark - the father of pioneers in Hokkaido and who left the famous words “boys be ambitious”. 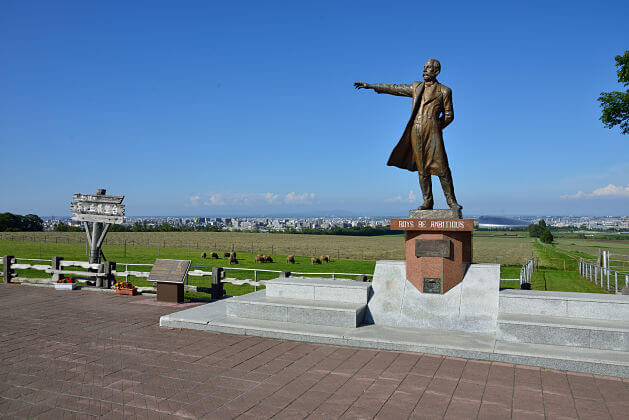 Muroran Shore Excursions will also take tourists to visit one of the famous and long-standing historical sites in Hokkaido. Known as a symbol of Sapporo city, the Former Hokkaido Government Office Building was first completed in 1888 and was built by local architects with local materials. French-style architecture can be seen from the slate tiles to the false chimneys. Inside the entrance in the main hall are the triple decorative arches providing a popular spot for photographs. Former Hokkaido Government Office Building contains some interesting display rooms briefing about the ongoing diplomatic problem of the return of the Northern Territories off the northern coast of Hokkaido, seized by the Soviet Union at the end of World War II as well as the history of Japanese settlement on Sakhalin.

Sapporo Clock Tower once served as a drill hall of the Sapporo Agricultural College but now turned into a museum where multiple displays about the history of the building and the entire city can be found. There are displays about the clock and a large ceremony hall on the second floor. In 1881 a clock bought from Boston was installed.

Mount Usu is a volcano that has erupted four times in the past 100 years. The most recent eruption happened in 2000. The volcano’s summit can be accessed via the Usuzan Ropeway. The observation deck from the upper station offers panoramic views of Lake Toya and the nearby Showa Shinzan. Adjacent to the second observation deck, there are views of the ocean and Mount Usu's largest crater, which was formed in an eruption in 1977. 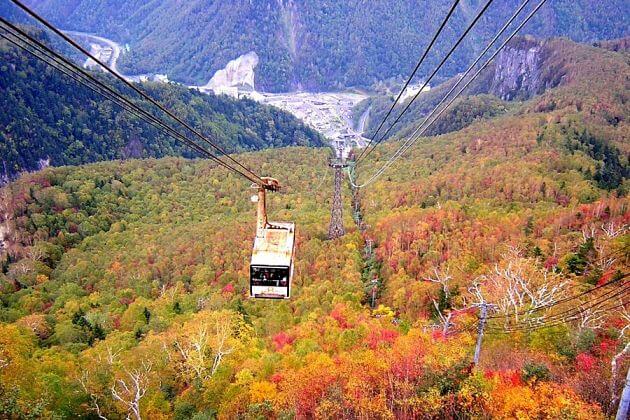