Japan religion and culture has been practiced for centuries with a distinct belief system. Two main religions have dominated Japan are Shinto and Buddhism, which accounts for 51.8% and 34.9% respectively according to a survey conducted in 2006. Acknowledge about Japanese belief in specific and Japanese culture, in general, will help visitors fit in the Japanese community better when traveling to Japan. Here are some main points due to introduce religion in Japan conducted by our Japan Shore Excursions’ experts.

Shinto – The Oldest Religion In Japan

Shinto is the main native religion alongside with Buddhism in Japan. Shinto, which mainly focuses on ritual practices and observance rather than the afterlife, has a great influence on Japanese people and culture. Shinto indicates the indigenous faith of the Japanese people and involves the worship of kami (Shinto gods). The word Shinto literally means “The way of the Gods”. The Sun Goddess Amaterasu is regarded as Shinto’s most vital kami. Religion does not have a founder nor a defined set of prayers. Instead, Shinto includes rituals and methods with a view to connecting modern and ancient times, living people and spirits. The main them of Shinto is known as love and honor for nature. That explains why a waterfall or a special rock is often regarded as a spirit of that place for growth and abundance. 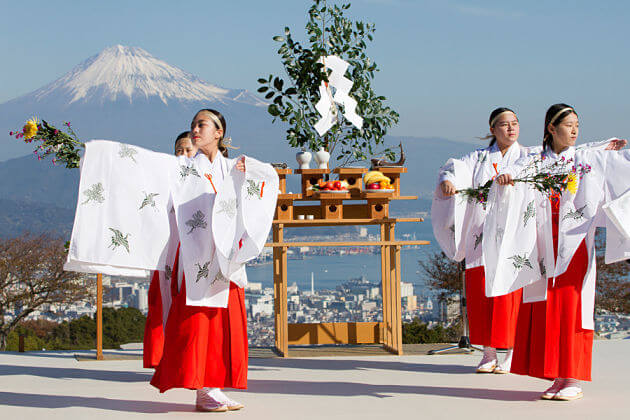 The history of Shinto is as old as Japan itself as its roots date back to the latter part of the Stone Age. At first, the introduction of Buddhism in the 6th century caused conflicts. But later the two religions were able to co-exist and even complement each other until today. In the Meiji Period, Shinto became the state religion of Japan. Shinto priests were made into state officials while important shrines were invested by governmental funding. Because the beginning story of Japan was used to foster a national identity, efforts need to be made to separate Shinto from Buddhism. After World War II, Shinto and the state were eventually separated.

Shinto public shrine is a building used as a place to honor kami. Its structure resembles characteristic Japanese architecture, each shrine has its own distinct style of different periods. There are 20 styles of gates, all of which are made of two uprights and two crossbars, there are 20 styles People visit the shrine to give thanks for the Kami’s protection and to pray for prosperity. Weddings are usually organized in Shinto style and Japanese couples will pronounce their wedding vows to the Kami. There are several festivals held in shrines throughout the year, which involve purification rites, prayer, ritual music, and dance as well as feasts. The most prominent Shinto shrine in Japan is the Grand Shrine of Ise. It is one of the popular shrines in Japan which worships the sun goddess Amaterasu. One of the largest culture cities which is home to several hundred shrines in Kyoto, which is most famous for Iwashimizu Hachimangu Shrine & Sake Brewery. Visitors can take a look at Kyoto Shore Excursions. 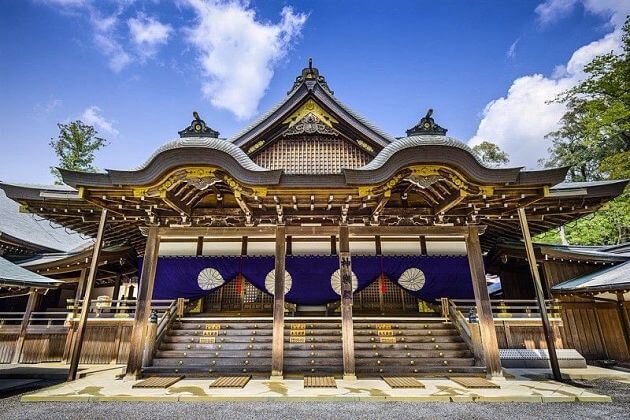 How to Visit a Shinto Shrine

Shrines are best known for their huge red entrance gate or tori. Coming through the red gates, visitors will find a water fountain where you can purify your spirit before entering by rinsing your hands and mouth using a bamboo ladle. Next, in front of an altar, you are likely to find a long thick rope hanging from a bell. First, ring the bell then throw a coin before the altar as on offering (five yen coins are considered lucky), clap your hands three times to summon the kami, then clasp your hands together to pray.

Buddhism – One Of The Most Popular Religions in Japan

Buddhism came from India in the 6th century BC. It involves the teachings of the Buddha, Gautama Siddhartha. The Mahayana or “Greater Vehicle” Buddhism was established in Japan through China. Although Buddhism was welcomed by the Japanese nobles, it did not initially become common because of its complex theories. The most popular form of Buddhism is known as Zen or Chan in China and Seon in Korea. Another significant form of Buddhism during the Kamakura period is “Pure Land” Buddhism (Jodo-Kyo) which accentuates the role of Amida Buddha. According to this, once the phrase “Namo Amida Butsu” is recited, upon death Amida will take a person to the “Western Paradise” or “Pure Land” and from then on to Nirvana. A more radical form of Buddhism was Nichiren Buddhism, created by the monk Nichiren, which honored the Lotus Sutra. Nichiren Buddhism is known as the second-largest form of Buddhism. It includes Soka Gakkai (Nichiren denomination) whose political wing forms the conservative Buddhist New Komeito Party (the third largest political party of Japan). 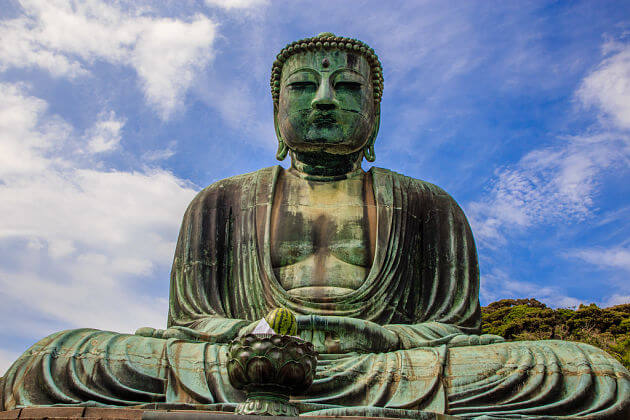 History of Buddhism in Japan

Buddhism was brought to Japan around the middle of the 6th Century BC. This was also the time that Japan was immigrated by Kore and influenced by Chinese culture. Within a few decades, the religion became so common in Japan that Buddhist temples were constructed at the capital of Nara by the Yamato state of Japan. Later, more branches of Buddhism such as Shingon Buddhism and Tendai Buddhism were introduced into Japan. During the Kamakura period (1185-1333), Zen Buddhism arrived in the country and two schools of the religion were constructed and named as Rinzai and Sōtō. Then came the establishment of the third school of Zen in 1661 making Zen Buddhism become one of the most popular forms of the religion. It was also during the Kamakura period that welcomed Pure Land Buddhism and Nichiren Buddhism to the country. Until 2014, it was estimated that there are about 377,000 Buddhist leaders, monks, and priests in the country.

Temples are the places established to worship the Japanese Buddhism. Various temples can be found across Japan, especially in Kyoto, one of the largest cultural centers, consists of several hundred temples. Temple has a main duty which is to store and display sacred Buddhist objects. Some temples are also used to be monasteries. A temple often consists of the main hall, lecture hall, pagoda, gates, bell, and cemetery. The first temple in Japan, Asuka-Dera for Asuka, was established between 588 to 596. Compared to early Shinto shrines, Buddhist temples were more ornamental and symmetric. Japan Shore Excursions’ tours always include some best temples to visit in Japan for visitors. The best cities to visit temples such as Kyoto, Nara, and Kamakura are some of the most popular places in Japan chosen by our visitors. Make sure not to miss these destinations as it is the best way to have a closer look at Japanese history and see the unique religious heritage of the country. 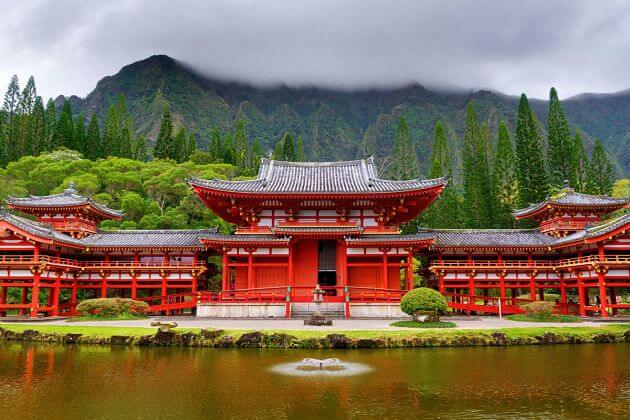 How To Visit A Temple

Before entering temple buildings, you should take your shoes off, remove your hats and kneel on the tatami-mat floor to pray. You can throw a coin into the offering box then show your respect by making a prayer. At some temples, incense (osenko) is burned in large incense burners. Visitors can get a bundle, light them and let them burn for a few seconds. Then put the incense into the incense burner and fan some smoke towards yourself rather than blow them because the smoke is believed to have healing power. Known as the home to Buddhist temples and Shinto shrines, Nara is famous for its features of a large museum of Buddhist artifacts as well as the stunning enormous statue of Buddha.

Other Religions in Japan

Besides Shinto and Buddhism, Japan also includes other forms of religion such as Christianity, Islam, Hinduism, and Sikhism. These religions account for about 5-10% of Japan’s population. These religions, which offer wealth, health and fortune, are mainly concentrated in urban areas. The majority of new religions are mostly focused on peace and happiness which receive a lot of suspicion from uninvolved Japanese. Some of the new religions such as PL Kyoden (Public Liberty Kyoden) and Soka Gakkai have certain roles in the establishment, politics, and business of Japan. 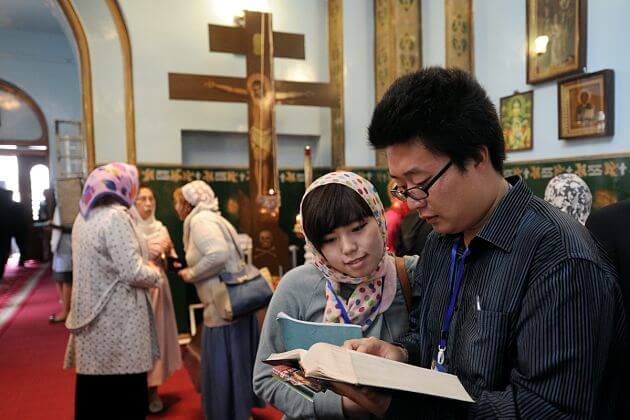 New Year is known as one of the most important events of Japanese and the most crowded time when a sea of people can be seen at shrines and temples as they want to pray for luck, health, and happiness for the new year. Japanese also has a religious custom of praying for their late relatives by paying a visit to ancestral graves. O-Bon, usually held around August 16th, is believed to be the time to welcome the spirits of the ancestors come down to earth to visit the living. Japanese often celebrate the births of new babies at shrines. Three, five, and seven-year-old children will be dressed in expensive kimono and brought to shrines. In early January, young people often visit shrines in bright kimono to do age ceremonies. A Japanese wedding nowadays is a great mix and match of Wes and East culture which involves several parts, including both a Shinto ceremony in traditional dress at a shrine and a Western-style wedding reception in a hotel or restaurant. 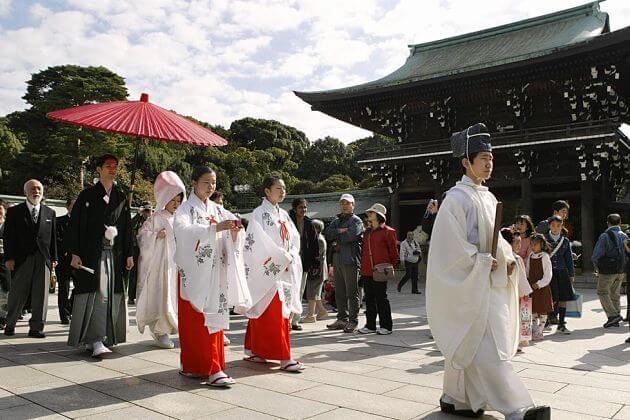 Funerals are often commanded by Buddhist priests. Nearly every Japanese are cremated and their ashes are buried under a gravestone. Japanese festivals (matsuri) often held at shrines which involves massive matsuri parades and rituals. Some of the most famous festivals in Japan include Yuki Matsuri Festival in Hokkaido, Omizutori festival in Nara, Kanamara Matsuri in Tokyo, and Kishiwada Danjiri Matsuri in South Osaka.