From time to time, Shimizu Port has increased in importance especially in trading. Nowadays, Shimizu Port stands in the top 3 of the most beautiful ports in Japan. Situated near Mount Fuji, Shimizu Port also becomes Japan’s most scenic ports because it offers some of the best spots to see this spectacular World Heritage. Shimizu is not only one of the most crucial trade ports but also a significant area providing access to various splendid landscapes and popular attractions in Japan. Along with enjoying things to do & see in Shimizu City, joining with Japan Shore Excursions even give visitors the chance to experience some of the most famous places to visit in Shizuoka and Hakone including both historic buildings and natural scenery.

The Most Popular Attractions in Shimizu

The S-Pulse Dream Plaza is one of the most popular entertainment and amusement areas in Shizuoka city. Its name relates to the local soccer team – Shimizu S-Pulse. It opened in 1999 which was also the year celebrating the 100th anniversary of Shimizu Port. The S-Pulse Dream Plaza is a four-story shopping mall which is the paradise for shopping lovers. This place involves various forms of entertainment such as movie theaters, food courts, museums, and a Ferris wheel. 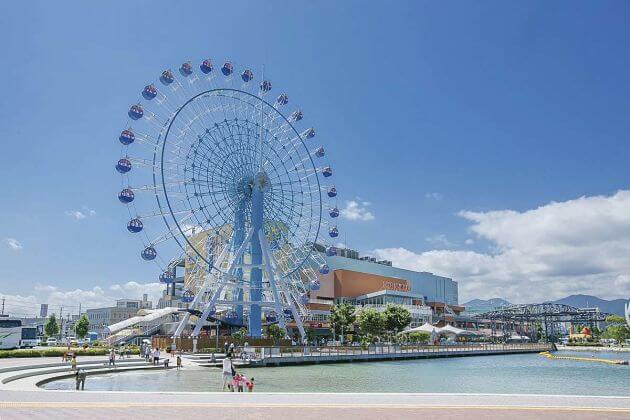 The mall attracts visitors most for its Shimizu Sushi Museum with colorful displays and models of sushi and some sushi restaurants. This is also the place where more than 300 different events are held throughout the year including fairs, music events, and other interesting activities. Visitors can also try on a taste of fresh seafood in the Kashi-no-Ichi Market nearby. Or learn more about the history of Shimizu Port and boat in the Verkehr Museum located in the opposite direction of the mall.

Kunozan Toshogu serves as a dedication to Tokugawa Ieyasu – the great leader who ended and united all of Japan. The shrine consists of lots of bright red buildings decorated with gold accents as well as colorful carvings and paintings. After the ticket booth is the Romon Gate, behind which the route leads to the main buildings, the Haidenand Honden halls. And deeper in the woods is the tomb of Ieyasu. On the outside of the shrine, travelers can take a look at shrine treasures including Ieyasu’s personal belongings, swords, armors, and hanging scrolls.

The main access to Kunozan Toshogu is from the south. However, it requires a lot of climbing up the mountain or travelers often can choose ropeway from the north instead. Over a thousand stone steps lead up the mountainside is the Nihondaira plateau which offers breathtaking views over the Suruga Bay, Oceanside, tea fields and the most incredible – Mount Fuji.

Miho no Matsubara is on the Miho Peninsula in Shimizu Ward of Shizuoka City, Japan. It’s most famous for the seven-kilometer seashore lined with green pine trees. These pine groves were recognized as part of the Fujisan Cultural Site in the World Heritage List. Miho no Matsubara was also selected to Japan’s top 100 white sand beaches and pine groves. It has a 650-year-old pine tree called Hagoromo no Matsu which is believed to be where the angel wearing a Hagoromo floated down. The Miho shrine nearby has the duty to preserve a piece of her plumage. 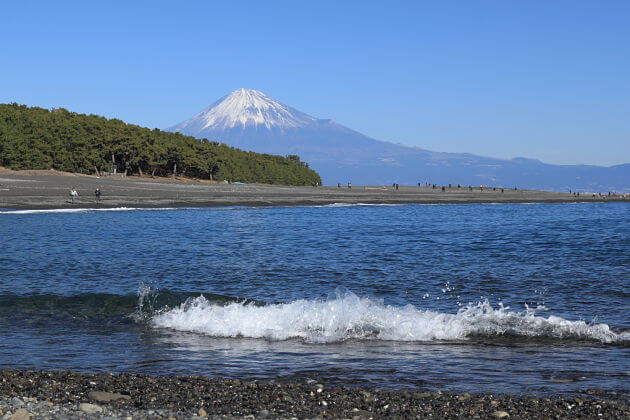 In October, a Hagoromo Festival takes place near the site of the old pine tree with many impressive performances. This is also a popular spot to view Mount Fuji and the Izu Peninsula across Suruga Bay. Miho No Matsubara offers spectacular landscapes with green pine trees, white waves, blue ocean and Mount Fuji which appears in various drawings, especially the Hiroshige Utagawa’s ukiyo-e.

Things to Do & See in Hakone

The Hakone Shrine, located on the shores of Lake Ashi in the town of Hakone, is a Japanese ancient shrine with a history of more than 1200 years. Nowadays, it is gradually becoming popular as a power spot. The shrine buildings hide under the dense forest, travelers will totally impress with its enormous torii gates. One standing mysteriously in the lake and two others over the main street of Moto-Hakone. When visitors pass the third Torii Gate to get to the main hall, you can receive the power of the shrine from the 1200-year-old arrow cedar. 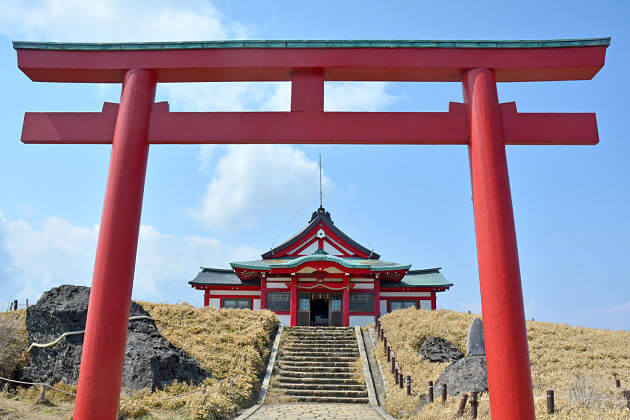 Getting through the forest, visitors will approach the main building of the shrine sitting among the tall trees. Especially, the shrine becomes most beautiful when surrounded by mist. A second shrine, Mototsumiya, situates at the summit of Komagatake can be accessible by the Hakone Komagatake Ropeway from Hakone-en or via hiking trails.

View Mount Fuji – the best thing to do & see in Shimizu

Mount Fuji is the highest volcano in Japan and the 7th-highest peak of an island in the world. It lies on the border between Yamanashi and Shizuoka Prefectures and can be seen from Tokyo and Yokohama on clear days. It is also one of Japan’s Three Holy Mountains along with Mount Tate and Mount Haku. In 2013, it gains the rank of the World Heritage List as a Cultural Site. Since then, Mount Fuji has experienced big popularity among artists, poets and the whole public in general throughout the centuries. Nowadays, Mount Fuji’s aesthetic beauty with snow-capped symmetrical cone exists in various photographs and arts. There are many spots available to view this iconic landscape. Here are some options to best places to see Mt Fuji suggested for Shimizu Shore Excursions:

Lake Ashinoko is a spectacular lake in the Hakone area. It is a crater lake formed in the caldera of Mount Hakone after the volcano’s last eruption 3000 years ago. Nowadays, The lake is not only famous for its views of Mt. Fuji but also for its significant hot springs, historical sites, and ryokan. Visitors can enjoy Mount Fujii view on cruises or boats, which has longed been the classic symbol of Hakone. Besides, adventurous travelers can try on a hiking trail promised to make your journey more remarkable. 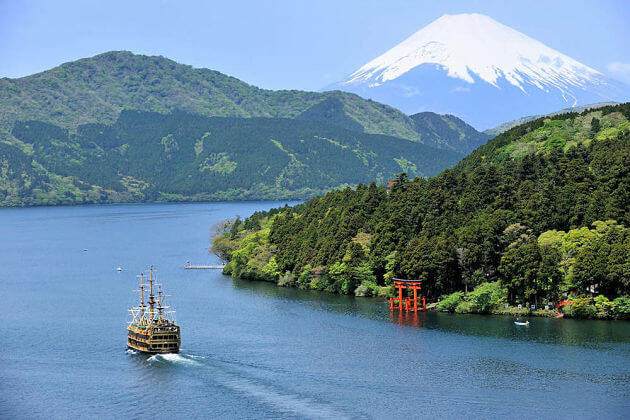 Mount Komagatake Ropeway is a Japanese aerial lift line in Hakone. The line, opened in 1963, is 1800 meters long leading from the shore of Lake Ashinoko to near the Komagatake peak of Mount Hakone. When the weather condition is good, visitors can experience extraordinary views of Lake Ashinoko and Mount Fuji from the ropeway’s upper station. A short walk away, at the peak to reach the Hakone Shrine Mototsumiya. This original Hakone Shrine also refers to an energy spot to see in Hakone.

Owakudani is a volcanic valley around a crater dating back to 3000 years ago in Hakone, Kanagawa Prefecture, Japan. Now, the area is an active volcanic zone with sulfurous vents, hot springs, hot rivers. Especially, sample Kuro Tamago, the black egg hard-boiled in the natural hot springs. The boiled eggs turn black and smell slightly sulfuric, eating one is believed to add seven years to your life. On clear days, visitors can enjoy good views of Mount Fuji from the valley. 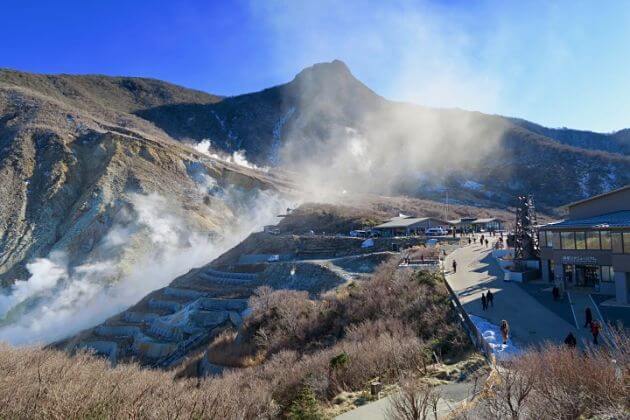 For the detailed list of best places to view Mount Fuji throughout Japan, visit this article.